PROBLEMS WITH SCALE, GENERAL FOULING, BACTERIA AND IMPACT ON EFFICIENCY 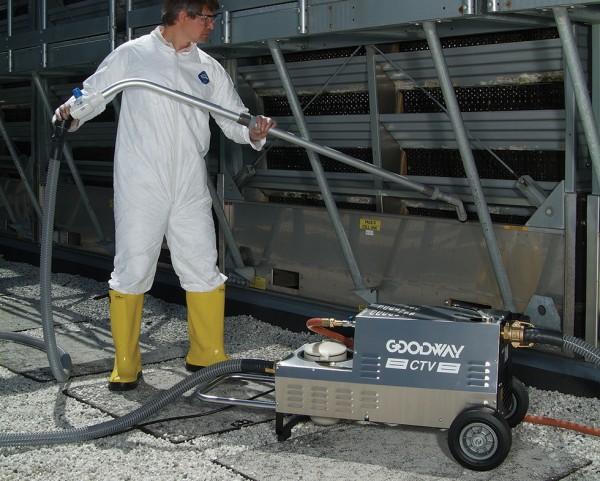 The extent of cooling tower performance, with the tower’s basic function of water heat rejection to the atmosphere, has such vital importance in HVAC, commercial, industrial, and large power facilities.

For example, the cooling tower’s performance is directly linked to HVAC plant chiller efficiency. HVAC systems account for approximately 45% of utility costs. Chiller operations account for the bulk of the electrical energy usage. The ratio of energy expenditure between chiller operations to the cooling tower is approximately 5:1, and as such, chillers get a lot of attention such as tube wire brushing, chemical descaling, and monitoring of their condition by eddy current testing as well as other preventative maintenance measures. However, it is common that cooling towers, although integrally linked to chillers, many times, simply do not get the same level of importance or care, even though proper maintenance and cleanliness of the cooling tower is just as important as the chiller.

By its design, a cooling tower naturally acts as a giant air scrubber and takes in large amounts of contaminants such as dust, suspended solids, pollen, insects, and materials that act as nutrients for bacteria in the bulk cooling tower water. These contaminants collect in the tower fill, settle in the tower basin, and end up in the bulk system water causing more problems. Effects of sunlight also cause algae growth on tower surfaces. Flash evaporation processes on the outside edges of film fill towers in particular also cause unsightly and hard scale deposits that coat the fill causing calcium fouling and blockage (these deposits can sometimes extend deep within the fill). There are also inherent dangers associated with the growth of Legionella pneumonia inside cooling towers and fill because of the accumulation of the foulant described.  All these processes result in reduced chiller and tower efficiencies.

For a rule of thumb, for every 1 degree F the condenser supply temperature is above design temperature, chiller efficiency is reduced by 2%. This combined with the foulant in the cooling water makes conditions worse with corrosion, scale, and microbiological fouling as a result.

Used in conjunction with our CTV-1501 TowerVac, this filtering system will return crystal clear water to your towers.

Used in conjunction with our CTV-1501 TowerVac, this filtering system will return crystal clear water to your towers.