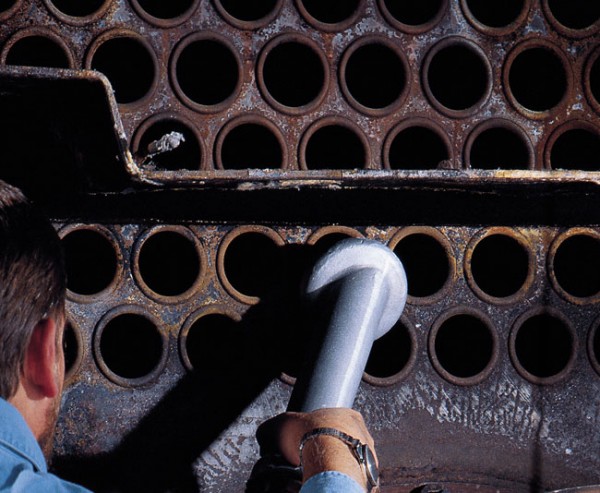 There are two types of tubular boilers - firetube and watertube. In the watertube boiler, water is carried in the tubes and heated to the point that it becomes high pressure steam. In most areas, watertube boiler plants must have licensed stationary engineers on hand at all times and maintenance is usually performed by in-house personnel.

In the firetube boiler, water surrounds the tubes and hot gasses travel through the tubes. This results in soot and scale deposits accumulating within the tubes. No matter what fuel is used (gas, oil, coal, or wood) the tubes need to be cleaned. If the tubes are not cleaned regularly, boiler efficiency is sacrificed and fuel is wasted. Soot actually has five times the insulating capacity of asbestos. For example, 1/8 inch of soot can accumulate in just two weeks, resulting in a heat loss of 47 percent and an increase in fuel consumption of 8 percent. As the layer of soot builds up, the stack temperature rises. For every 40°F rise in stack temperature, boiler efficiency is reduced by 1 percent. That's a pretty good argument for regular tube cleaning.

Firetube boilers are far and always the most numerous of the tubular boilers in use in larger commercial facilities. They are commonly found in schools, hospitals, apartment buildings, office buildings, shopping centers, hotels, factories, military bases and in some ships.

Over the years, several methods have been developed for cleaning boiler firetubes. Twenty-plus years ago, one popular method of keeping tubes clean was the use of soot blowers. Soot blowers consisted of steel tubes fitted with blowing nozzles, that were mounted on the tube sheet of the boiler in such a way that the nozzles could be maneuvered to blow steam, or air through each tube. Soot blowing was performed at scheduled intervals in hopes that the tubes would be kept clean. This practice was widely accepted in the days when environmental concerns were not as important as they are today. With sootblowers, the soot was simply blown out through the smoke stack and into the atmosphere - a practice that is frowned upon today. Today, sootblowers are used mainly in large power utility boilers where the smoke stacks are equipped with scrubbers and other environmental devices.

Another tube cleaning method practiced by some boiler tube technicians was washing out the tubes using a fire hose. One can imagine the mess this left behind. Yes, the tubes were cleaned, but the boiler room was left with a layer of black mud on the floor. It took longer to clean the floor than the tubes. In addition, this was often done on boilers firing Bunker C #6 oil with a high sulfur content, which presented a safety issue - sulfur mixed with water creates an acid.

Another tube cleaning device that has come and gone is a machine that is hung from a system, or racks that could be remotely guided to the opening of each tube one-by-one. Once positioned, the tube cleaning machine mechanically drove a cleaning brush down the tube and back using a cable. It was a great idea, but it took a great deal of time to assemble and disassemble the racks on each boiler.

In most cases, tube cleaning was strictly a manual operation that required a great deal of time, labor, mess and inconvenience. Brushes fastened to long, heavy metal rods were manually pushed and pulled through the soot laden boiler tubes, resulting in clouds of soot filling the air and settling on every surface in the room. The backbreaking effort went on for hours, followed by the immense task of individually vacuuming each tube and cleaning up the boiler room. Eventually, the issue of worker health was raised with the discovery of Vanadium Poisoning in the 1970s. Vanadium Poisoning is an influenza-like illness that can have permanent effects. Toxic effects were reported from breathing air containing as little as 5 mg per cubic meter. No wonder nobody wanted to clean firetube boilers!

Unfortunately, there are still many operators out there who think this is still the only way to do the job.

Most watertube boilers have tubes in a more, or less vertical position. Some watertube boilers have straight tubes, which can be cleaned using methods similar to those described above. Most watertube boilers, however, have tubes with bends in them, making them more difficult to clean. In addition, where firetube boilers commonly have only soot and ash to be removed, watertubes commonly have scale deposits that adhere stubbornly to the tubes. Both, the amount and the nature of the scale, are determined by the water quality and the effectiveness of water treatment. Scale is formed when water is heated and the suspended solids in the water precipitate out onto the heating surfaces. A well-managed water treatment program is essential to minimizing scale deposits.

Early watertube cleaning devices employed the use of cylindrical air motors fitted with complicated cutter heads, fastened to the end of a heavy compressed air hose. The entire motor/cutter assembly was then fed manually through the tubes and cleaning was performed dry, followed by a flushing with a water hose. Each air motor was good for only a narrow range of tube sizes, so if the user had many tube sizes to clean, he had to have multiple air motors, which drove up the cost. Interestingly, this technology got its start in the U.S. Navy for cleaning ship's boilers.

Good News - There are Better Ways

Over the years, tube cleaning technology has made great strides in developing faster, easier and more efficient cleaning methods. Equipment is now available that enables a single operator to perform two tasks at once, in a fraction of the time required for outdated cleaning methods.

For firetubes with soot deposits, there are tube cleaning machines that mechanically drive brushes, or scrapers through the tubes - requiring almost no human effort. These machines are, in turn, connected to powerful vacuums that draw the loosened soot from the tubes, simultaneously, leaving the tubes, boiler room and operator completely clean.

Some firetube boilers develop scale deposits. This is particularly true with waste heat boilers and boilers fired on lesser quality fuels. Some of the worst waste heat boilers are found at hospitals where medical waste is burned in incinerators and the boiler is used to capture the heat generated by the incinerator. In many cases, a straight brushing action is not sufficient, and rotary tube cleaning equipment must be used. Manually-fed rotary systems are available that incorporate simultaneous vacuuming, as well. Many of these systems were based on designs originally intended for condenser and chiller tube cleaning and they work extremely well on scaled boiler tubes.

Systems are now available that utilize more powerful air motors, which drive flexible shafts fitted with any of a variety of boiler tube cleaning tools. The flexible shaft is sheathed in a water tight casing, which transports water right to the cleaning tool. This feature allows for the tubes to be cleaned and flushed in a single operation, saving time and labor.

Chemical cleaning has been used on boilers for many years and is periodically needed to clean the waterside of firetube boilers, where calcium and other mineral-based scale has formed. Industrial boiler scale removal chemicals can effectively remove calcium carbonate and other scales that adhere to heating surfaces. Chemical cleaning is a viable way to clean the waterside of firetube and water tube boilers and should be performed by technicians who are trained and equipped to do the work safely.

Every boiler maintenance program should include regular efficiency testing, to reveal certain trends that indicate it is time to clean the boiler. For example, an increase in stack temperature frequently signals soot, or scale build up. An electronic combustion efficiency tester should be considered standard for the maintenance program. They are absolutely essential for tuning the burner properly. Many models of testers are available today with capabilities to measure and/or calculate net stack temperature, oxygen, carbon monoxide, carbon dioxide, nitrous oxide, excess air, combustion efficiency and other values. There are models available to fit every need and budget. Comparing data from test to test will help pinpoint maintenance requirements.

Goodway's ScaleBreak®-SS is an industrial-strength chemical descaler that safely removes calcium, rust, minerals, and other contaminants from stainless steel surfaces like tubes and pipes.