GET YOUR FREE CATALOG: 180+ PAGES OF MAINTENANCE TOOLS AND TIPS 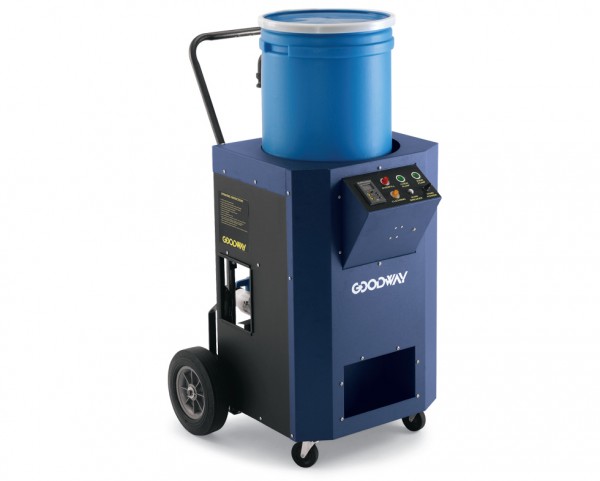 When Cory Wasiakowski saw the temperature variance on his heat transfer, he knew that he had a problem. Cory is the maintenance supervisor at UGI Development’s Hunlock Creek Energy Center near Wilkes-Barre, Penn. The plant generates 125 megawatts and provides power to grid operators in the region.

Along with his other responsibilities, Cory’s team maintains the plant’s duplex centrifugal chiller unit. “It’s a sizeable condenser at 3,400 tons. We simply looked at our temperature in and our temperature out. We could easily tell that wasn't getting efficient heat transfer in the unit,” says Cory.

Victor recommended Goodway’s GDS 15 PH Circulating Pump to be used with Goodway’s ScaleBreak. The GDS 15 is a hands-free, automatic chemical pump. It’s easy to operate and with a 30 gallon-per-minute pump quickly re-circulates ScaleBreak for fast and efficient descaling. ScaleBreak is Goodway’s biodegradable descaler. It dissolves mineral deposits faster than any other liquid descaler on the market.

“We ran the pump for eight hours start to finish. We had no problems whatsoever. Their pump is as advertised,” says Cory. “Very simple to operate and user-friendly.”

But what about the results? “Right now, based on visual inspection and running in our current temperatures, we see good improvement in our heat transfer,” says Cory. “Before we ran the pump, our heat transfer was probably four to five degrees. After we cleaned with ScaleBreak, we reached almost double that.”

They shut down this condenser in October. “We need that system during the summer,” Cory says, “so it will get cleaned once a year with ScaleBreak for sure.”