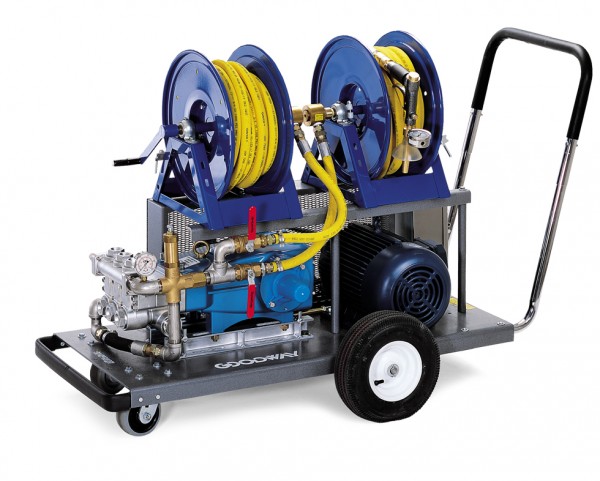 BSL System and Super Scrubbers get the job done, fast!

At the Presque Isle plant the problem is iron oxide, which enters the condenser tubes as very fine particles. After a few months these particles build up and form hard, constricting deposits. The resulting deposits increase the steam turbines back pressure and limits the condenser’s performance. When this happens the condenser’s tubes must be cleaned. Because of the cold water temperatures of Lake Superior, the plant does not have a problem with mussels or other bio-forms.

For many years, condenser tube cleaning at the plant was done with a high-pressure hydro-blaster using water at a pressure of up to 6,000 PSI. An operator inserted a high-pressure hose 18" into the condenser tube and signaled a coworker to activate the high pressure water. After sending the hose down the length of the tube, ranging from 22' to 30' depending on the unit, the hose was depressurized and removed. This operation was repeated until all the tubes had been cleaned.

Sorrelle says that there are approximately 5,000 tubes in each of the plant’s nine condenser units and as a result hydro-blasting is extremely time consuming and expensive. On top of that, the first 18" of each tube is not adequately cleaned. In addition, safety was also a major concern, says Ms. Sorrelle. In a repetitive job like hydro-blasting, and working up to a 12-hour shift, accidents can happen.

This tube cleaning system uses pressurized water, up to 400 PSI, to shoot coiled brushes (or other projectiles) through the tubes. In operation an operator first inserts a coiled brush into a tube and then uses a gun to shoot the projectile through the tube. As it is propelled forward, the brushes remove the tube deposits.

The plant has also purchased Goodway’s super scrubber tube cleaning projectiles. These projectiles come equipped with either high tensile carbon steel or wear resistant polymer blades and resilient nitrile bushings. Each projectile has a force adjustment that is preset at the factory to match both the type of deposit and tube material for tubes ranging from 5/8" to 1-1/4" O.D. The carbon steel blades are not only able to remove hard iron oxide deposits, they are also effective in removing manganese calcium, carbonate and silica in the tubes.

Plants with soft deposit problems such as mud, algae, silt and slime, or with softer tube materials may elect to go with polymer blades. The manufacturer reports that both types of super scrubbers are also effective in removing clams, mussels and barnacles. Each projectile can be reused several times before being discarded.

Sorrelle claims excellent tube cleaning results with the new system, as well as elimination of the safety concerns that had prevailed during hydro blasting. "We load and shoot six hundred super scrubbers at a time," she says, "and it only takes about three seconds to clean a tube." In addition, the entire length of the tube can be cleaned.

At Presque Isle, the time needed to clean the condenser tubes has been cut from five days, including setup, down to three-and-a-half. Sorrelle feels that, because of the extremely thorough cleaning action of the new cleaning system it may be possible to extend the length of time between cleanings from the current twelve months to eighteen months.

Find A Global Distributor In Your Area

Goodway products are sold directly and are available from a variety of distributors around the globe. Find out more here.