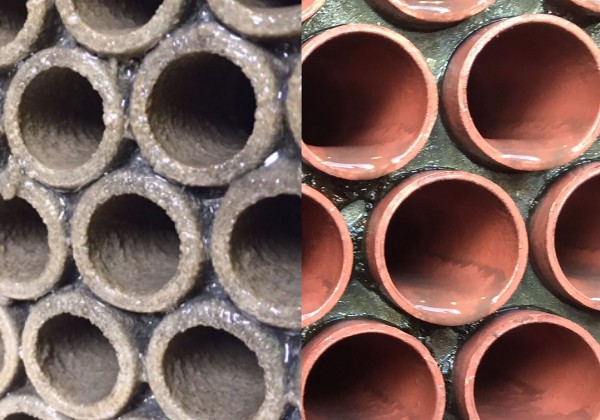 Bacon explained that as water evaporates out of the open loop, calcium deposits are left. As more water is added and the process repeats, the calcium builds up, causing clogs that prevent the system from cooling properly. The problems with cooling are most noticeable in the summer.

“In the summer months we run into issues a lot where we’re just not able to keep our machines cool,” Bacon says. “Some of it is due to capacity [with the evaporative cooling system]. But the other side of it is these machines were installed in the ’80s and ’90s and they’ve probably never had a cleaning done for their heat exchangers. We’ve never scoped it, but we’re very sure that there’s a lot of buildup in these pieces of equipment.”

So in April, Bacon and his team decided to use Goodway’s ScaleBreak and GDS Pumping System to clean the cooler and discovered how easy and effective it was to use.

“You fill the system up with water, you hook it up to what you want to clean, you drop the hose inside the chemical [ScaleBreak] and then you turn it on and let it run,” he says.

After using the GDS pumping system with ScaleBreak the company has experienced less cooling system downtime.

Additionally, they’ve seen positive effects with their thermalalors. “We have a whole bunch of thermalators that we use to increase the temperature of water from the molds. They get scale build up through them and they’re not able to maintain temperatures well.” says Bacon. “When that happens, they try to overcompensate and put more heat in just to get past all the calcium buildup. Then we don’t get the same heat transfer.” But after using Scalebreak they experienced cost savings due to less product loss and less wear-and-tear on the thermalators and chillers.

If you’re experiencing decreased productivity with your equipment, it might be time to have it expertly cleaned. Contact Goodway today to find out more about its descaling products for your equipment maintenance needs.